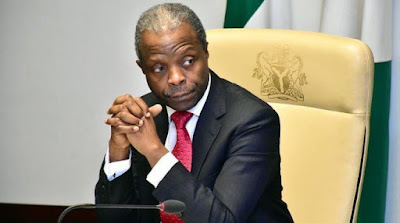 The Presidency has responded to claims by the House of Representatives that the emergency food supply intervention in the Northeast was misplaced.

It said that the then Acting President, Vice President Yemi Osinbajo, acted within his constitutional mandate, adding that the food purchased were delivered to the affected areas, contrary to the belief of the lawmakers.

Senior Special Assistant to the Vice President on Media and Publicity, Laolu Akande, said in a statement that the House Committee’s conclusion that the payment made was in contravention of approval of the National Assembly was both false and misleading.

Akande explained that when the United Nations World Food Programme (UN WFP) issued a warning that it would be reducing its vital support to about 1.8 million IDPs by as much as 85 per cent, due to corresponding reduction in funding by donor countries, the Federal Government moved urgently to prevent the looming disaster by establishing a strategic food intervention plan for the affected states.

The statement reads: “Our attention has been drawn to a report of the House Committee on Emergency and Disaster Preparedness issued on Thursday, November 8, 2018, particularly in respect of funds released for “emergency intervention of food security to the North-East” in June 2017, when the Vice President was Acting President.