University education… In whose interest?

Ondo State Governor Rotimi Akeredolu SAN believes the presence of large number of unemployed university graduates calls for an urgent review of our education system. ROBERT EGBE looks at his proposal for how this can be done.

You don’t need to go very far to see the extent of the problem. On many streets, droves of able-bodied secondary school leavers or tertiary institutions’ graduates can be found in lottery shops day-dreaming their way to a better life.

Ondo State Governor Rotimi Akeredolu believes part of the reason for this is that for decades, there has been a disconnect between academic curricula and societal needs, resulting in certificated graduates with little or no capacity to solve problems.

He suggested several ways out of the problem. The Senior Advocate of Nigeria (SAN) made his proposals in a lecture, ‘University Education: utility and prospects’, at the recent 20th Founder’s Day ceremony of the Adekunle Ajasin University Akungba (AAUA), Ondo State.

Is the idea of education in Nigeria misconceived?

The education of a human being in a society must be purposeful, says Akeredolu.

To him, “constant and continual interactions with the environment present new areas of challenge, which must be surmounted to achieve significant improvement in the living conditions of the society”.

“These specific issues should form the basis of the training process, the culmination of which is the acquisition of the necessary skills to fix the problems,” he said.

He believes that the Nigerian education system got it wrong here.

“The very idea of education appears to be grossly misconceived in this clime,” the senior lawyer said.

He suggested that the country seems to have equated “the acquisition of certificates devoid of skills and knowledge to solve problems” with capacity.

The governor continued: “Formal instructions seem, deplorably limited to, and aimed at performing and perfecting the rites of a long, tedious and exacting process, culminating in certification.

“The unmistakable disconnect between the academic curricula  and the current needs of the society should nudge us from our complacent revelry.”

According to him, education connotes proper nurturing for general and specific purposes.

Thus, “the acquisition of certificates should be evident in the capacity to engage challenges, project, with near accuracy, based on existing data, and break new grounds to accommodate the inherent dynamism in human affairs.

“The very fact of the embarrassing presence of a multitude of unemployed youths in the polity calls for an urgent review of the current practices.”

Akeredolu acknowledged the importance of a well-balanced curricular. He said: “Knowledge is potential power.  Its application is the only useful ingredient in the cyclic process of being and becoming. Any society which ignores the lessons of experience is doomed to extinction. Any habitation of human beings which segregates, with a view to reserving the privileges of certain professions for members of a social class, cannot survive. Acquisition of knowledge is not as important as the liberalisation of its benefits for the inhabitants of a given environment.

“Every curriculum of instructions must be peculiar and specific. We must break away, decidedly, from an unproductive generalist scheme, which ensures a uniform curriculum for disparate and divergent societies.  This attitude militates against productivity.”

The lawyer argued that education anticipates integration and suggested that apart from the acquisition of a general knowledge, specific areas of interest must be explored “with a view to addressing the challenges encountered by those who inhabit a geo-political space. It also promotes tolerance of dissenting views.

“Embarking on journeys to other lands is a veritable source of education. It broadens one’s horizon concerning the world and the way to live in it. It opens our eyes to wider possibilities.

It makes us appreciate modest efforts undertaken for survival. Education allows us to understand why we are different and the need for tolerance.

It teaches us to be self-sufficient and imbues in us confidence in the knowledge thereof. Education is life,” he said, noting that a truly educated person is not rigid about his/her position.

Education is beyond literacy

Do many people often fall into the error of mistaking being lettered to be the sole purpose of education? 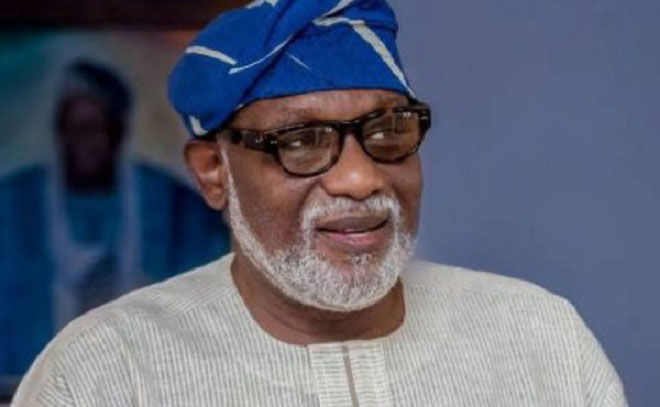 He argued that the ability to read and write only opens doors for opportunities, and that proficiency in an official language of the state confirms elitism, not capacity.

Akeredolu said: “Being knowledgeable in specific areas of knowledge is an advantage. The needs of a society should be emphasised in a curriculum of training. A properly trained citizen is asset to the community. An untrained compatriot is a perennial burden.

“A system of instruction must be purposeful; it must be designed to achieve an end.  Acquisition of knowledge confers potential ability status on a people.  Its application actualizes dreams and prevents untoward occurrences.”

The governor argued that pre-colonial societies operated functional systems of educating their citizens. And that, although simple, it ensured that “unemployment rate was zero.

“Every agile person was gainfully employed. Sufficiency in food production was a source of dominating other climes which battled with inclement weather. The system of education was effective and productive.

“All citizens felt a sense of belonging even when  there were  noticeable social malcontents in some communities. The political system also reflected the nature of the process of systematic indoctrination embedded in training citizens and/or subjects.”

He made the case that European missionaries, who  introduced Western education through their contacts with African societies, exploited the local discontents among the communities.

Akeredolu said: “The most potent weapon used against the local elite by these foreigners on evangelising mission was the  abolition of slave trade. A corollary to that was their stance against the killing of twins in some parts of Africa and the criminalisation of widowhood.

“These sentiments were exploited effectively and the indigenous peoples of various African communities became alienated from their ancestral beliefs and practices. A new religion, bandied as superior, was introduced.

“Anyone, who wished to be considered pure must be converted to the new way. Many erstwhile outcasts in the communities jumped at the rare opportunity for reintegration into the society at a somewhat higher and increasingly acceptable level. The communal spirit became shattered. Opportunism creeps into our lexicon as a new and very rewarding career.

He said education gradually became a source of competition among natives and that “the commoditisation of values became complete with the introduction of a new administration over the local order.

“The disruption was total and irreversible. An entirely different system of education, deliberately designed as an effective alienating agency, was entrenched. This new system, pretentious in form and dubious in content, truncated the natural epistemic progression in the subjugated territories. Erstwhile freeborn natives had become subjects to foreign interests.

“The curricula of the new system were structured to ensure maximum exploitation of the colonised spaces across  the  continent. A more pernicious system of dispossession, both materially and spiritually, was substituted in place of the abolished practice of slavery.

“The entire landscape of the continent was seized, with the exception of Ethiopia, which resisted Italian colonialism successfully under the leadership of Emperor Haile Sellasie.

“The colonial administration put in place a system, which confirmed our dependent status. Crass consumerism replaced collectivisation of aspiration, through labour, for productivity. Everything about our existence was subjected to the crucible of colonial clearance for acceptability. Our ultimate ambition was to become Europeans, in spite of occasional pretenses at social engagements when the African hybrids adorn traditional outfits, oftentimes, in total mockery of the very essence of tradition.”

Colonial education set us up to fail?

He argued further that the colonial educational system was “structured to encourage subservience and hypocrisy.

“The measure of diligence among the natives found expression in their ability to work assiduously in colonial interest against their own people. Promotion was earned in accordance with the extent to which these alienated African were ready to assist in the relegation of the indigenous knowledge system.

“The training of Africans, nay Nigerians, was geared towards the production of middle cadre administrative staff for colonial administration who would act contemptuously and condescendingly against their own people.”

The governor suggested that the current “deplorable situation” calls for an urgent and comprehensive review.

“We must desist from hinging our hopes on false expectations. The presence of a very large army of unemployed graduates in every part of a country which suffers acute infrastructural deficit exposes as false our constant claims to progress.

“While it is correct to assert that there has been some significant growth, it has been largely uncoordinated. There is no continuity in execution of projects. Proper training of staff has ceased.

“It is, therefore, not surprising to note that the products of our universities are left more confused as graduates than when they enrolled to study.  It is a shame that the country boasts of over 40 million youths who are more active participants in NaijaBet and Lotto, Baba Ijebu since there is nothing for them in the system. It is all the more tragic that a country, which enjoys optimum population, is burdened by the challenge of lack of skills by those on whose shoulders the development of the country should rest.

Akeredolu proposed that “primary and secondary school education should be made compulsory and free. The curricula at this level need to be reviewed to begin the process of re-orientation of our youths. “University education should be for those who have the capacity to proceed to that level. Ideally, government should make it free but the issue of paucity funds makes that option impossible.

“There are too many redundant staff in all government offices.  A negligible percentage of workers across the country gobble a disproportionate quantum of the nation’s resources.   A country which budgets 85 per cent of her expected revenue for recurrent expenditure cannot break even, rather it will have its growth and development retarded.”