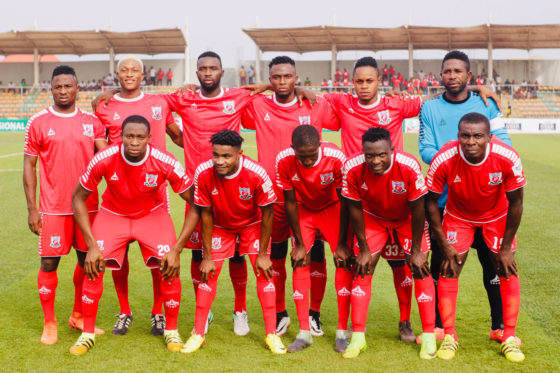 Abiodun Thompson has scored in successive home matches and this time, his goal helped Heartland Football Club of Owerri record their first ever victory over neighbors, Abia Warriors of Umuahia.

The MatchDay 14 clash of the Nigerian Professional Football League (NPFL) at the Okigwe Township Stadium recorded a full house as the Naze Millionaires threw open the gates for fans to come support their darling team.

It was a feisty affair from the blast of the whistle as both teams went for victory. It was the home team that settled down earlier as they raided the visitors backline continuously.

ALSO READ: Alleged US conviction: I was tried, but not found guilty ― Omo-Agege

Heartland should have taken the lead in the 16th minute. The combination of Sodiq Abdullahi and Thompson was causing problems for Austin Oboroakpo and Jean Parfait in the visitors defense. The duo’s good link-up play released Abiodun with a clear sight of goal but the striker’s low shot narrowly missed target. Big let off for the away team.

Abdullahi followed up in the 22nd minute as Heartland layed siege to the visitors goal. His shot from close range cannoned off defender Oboroakpo.

The home team weighed in with another attempt two minutes later as Obioma Chukwuemeka and Thompson broke free from the center circle and Abiodun had a clear sight on goal but the Warriors defenders in a desperate attempt to stop him fouled him just outside the box.

The referee allowed advantage play but gave a free kick when they lost the opportunity to score.

Jimoh Oni was presented with the best chance for the visitors to take the lead with five minutes left to play in the first half. His low show shot was inches away from Ikechukwu Ezenwa’s goal and Heartland responded with a miss of their own.

A fine cross from the left from Sodiq Abdullahi only needed Abiodun to guide the ball into the net,but his header didn’t trouble Goalkeeper Uche Okafor.

The first half ended goalless. After the interval, Heartland continued their search for the opening goal. Full backs Chidera Eze and Benjamin Francis pushed up more to support the attack and it paid off in the 56th minute. The visitors failed to clear their lines as the ball kept bubbling around the penalty area.

Obioma had the presence of mind to lay the ball for better placed Thompson and the power striker unleashed a powerful low drive to record his second goal in as many matches.GK Uche Okafor was well beaten.

Abia Warriors was having a bad day in the office as they missed yet another opportunity to draw level. The culprit yet again is Oni. A telling pass from Shedrack Asiegbu located the unmarked striker in the box. He should at least hit the target but somehow nodded the ball over the bar.

Heartland should have put the game to bed midway into the second half. Thompson was having the game of his life. His snap shot from inside the box would have ended the match as a contest but Goalkeeper kept out the ball with a spectacular save.

An elated Coach Fidelis Ilechukwu praised his wards for being the first Heartland team to break the Abia Warriors jinx.