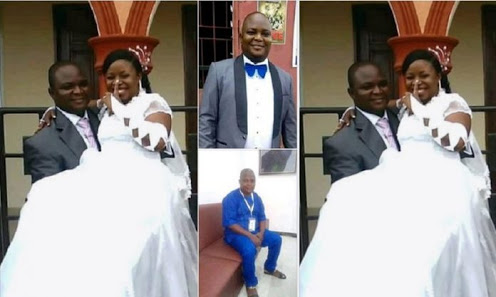 A popular lecturer in Delta state has passed away in an unfortunate circumstance – leaving his family, friends and students in lament. The lecturer identified as Engineer Onogbotsere Monday who got married late last year – died suddenly last night following what was described to be a spiritual attack.

According to report, he is survived by his wife and a child.

Since the news of his death broke online, his students and friends have taken to his Facebook wall to mourn his death.

One of them, Kerry Bethuel wrote; RIP Engr Onogbotsere Monday still can not believe my Lecturer who encourages me always , a vibrant engineer with with sound impacting skills, is gone! life life life..

Another poster, Rachel, wrote; Death oh death you couldn’t sorry for Mr Onogbotsere Monday to look after his new wedded wife and his beautiful kid, and family why death?? You couldn’t allow him to look after his students at Delta state polytechnic otefe oghara engineering department and those associated with him from other department why death?? You couldn’t allow him to eat his fruit of his labour why death? Death you put all of us on suspense waiting for our beloved brother, lecturer, Frd ,why death? Death death death you are wicked. Rip crying.