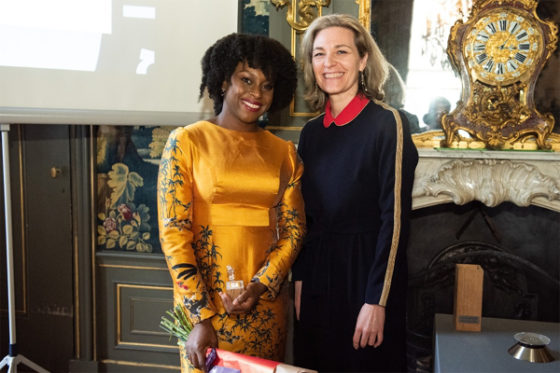 Adichie was awarded the prize for “her contribution to humanity through her literary works and her public engagements which have played huge roles in effecting change and a better understanding of issues such as identity and feminism.”

The jurors for the inaugural edition of the Belle van Zuylen Ring prize, in Netherlands, also noted that Adichie was deserving of the award “because of the unique way in which she knows how to represent and question the world of today and its ingrained thinking patterns.”

As part of the activities for the festival, Adichie also delivered a thought-provoking speech, had a conversation with renowned Dutch cultural historian and author, Nancy Jouwe; engaged with writers and literary minds from all around the world and signed autographs for teeming fans.

Adichie took to her Instagram page to express her delight at receiving the award saying, “Writer and Thinker Belle van Zuylen (1740-1805) famously said, ‘I have no talent for insubordination’. I am honored to receive a prize in her name” the award winning writer wrote.

Recall that in November 2019, Chimamanda Adichie made history by becoming the first Nigerian and youngest African to have received the UN Foundation Global Leadership Award. She was recognized for using literature and storytelling to connect with people across generations and cultures on issues of gender and racial equality.

Adichie is the author of multiple award winning novels: Purple Hibiscus, Half of a Yellow Sun and Americanah amongst other publications. Adichie’s works have been translated into over fifty languages. She has written articles for The New Yorker, The Financial Times and The O. Henry Prize Stories.

Her 2006 novel, Half of A Yellow Sun was recently listed as one of BBC’s 100 Novels that shaped our world. The French translation of her most recent book, Dear Ijeawele, or a Feminist Manifesto in Fifteen Suggestions published in March 2017 was the non-fiction winner of Le Grand Prix de l’Héroïne Madame Figaro in the same year.

The International Literature Festival Utrecht (ILFU) is an annual festival which embraces literature in all its forms. Multiple venues around the city play host to a number of literary themes. The festival was inaugurated after UNESCO appointed Utrecht as a city of literature in November of 2017.